AMY’S STORY – I DIDN’T KNOW I HAD OSTEOPOROSIS

On the surface Amy thought she has no signs of osteoporosis. She had friends who had suffered broken bones due to a disease called osteoporosis which causes bones to become weak and eventually break. It made her worry. What if that could happen to her too? A friend down the road had moved to a nursing home after a broken hip, and she didn’t want that to suffer the same fate.

So the next time she visited her family doctor she asked about getting tested to see if she was at risk too.

The first step was to look at Amy’s health and medical history which provided clues to her bone health:1


Amy’s responses indicated that she had risk factors for osteoporosis, which puts her at risk of fractures. Her doctor sent her for a bone scan, called a DEXA, to assess her bone mineral density.

What is a DEXA scan?2

DEXA stands for dual-energy X-ray absorptiometry. It is a fast, non-invasive bone scan that measures the density of your bones in the spine and hip. The DEXA scan helps Amy’s doctor to decide if action is needed to improve her bone health. The scan result is called a T-score that compares your bone density with the normal values for healthy young adults. This score will determine if you have normal bones, low bone density or osteoporosis. Amy’s T-score is −2.6 at the femoral neck.

Based on her T-score, Amy’s doctor has diagnosed osteoporosis. 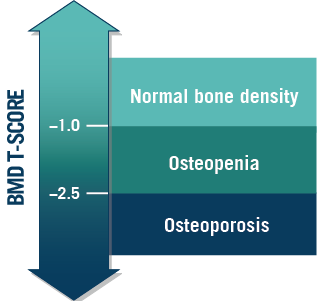 How likely is Amy to suffer a broken bone due to osteoporosis?2

Amy’s doctor enters Amy’s T-score and information from her medical history in an online tool, called FRAX (fracture risk assessment tool) which calculates her risk of suffering a broken bone due to osteoporosis. The results say she has almost a 1/10 (8.5%) chance of a major osteoporotic fracture and about a 1/20 (4.5%) chance of a hip fracture in the next 10 years.

Doctor explains her risk of future fracture and recommends starting osteoporosis treatment. Together they will make a bone health plan to protect her from broken bones.

*Amy is a fictitious patient

4 Foundation IO. Spot the signs of a breaking spine. 2018. osteoporosis.foundation/educational-hub/material/brochures.